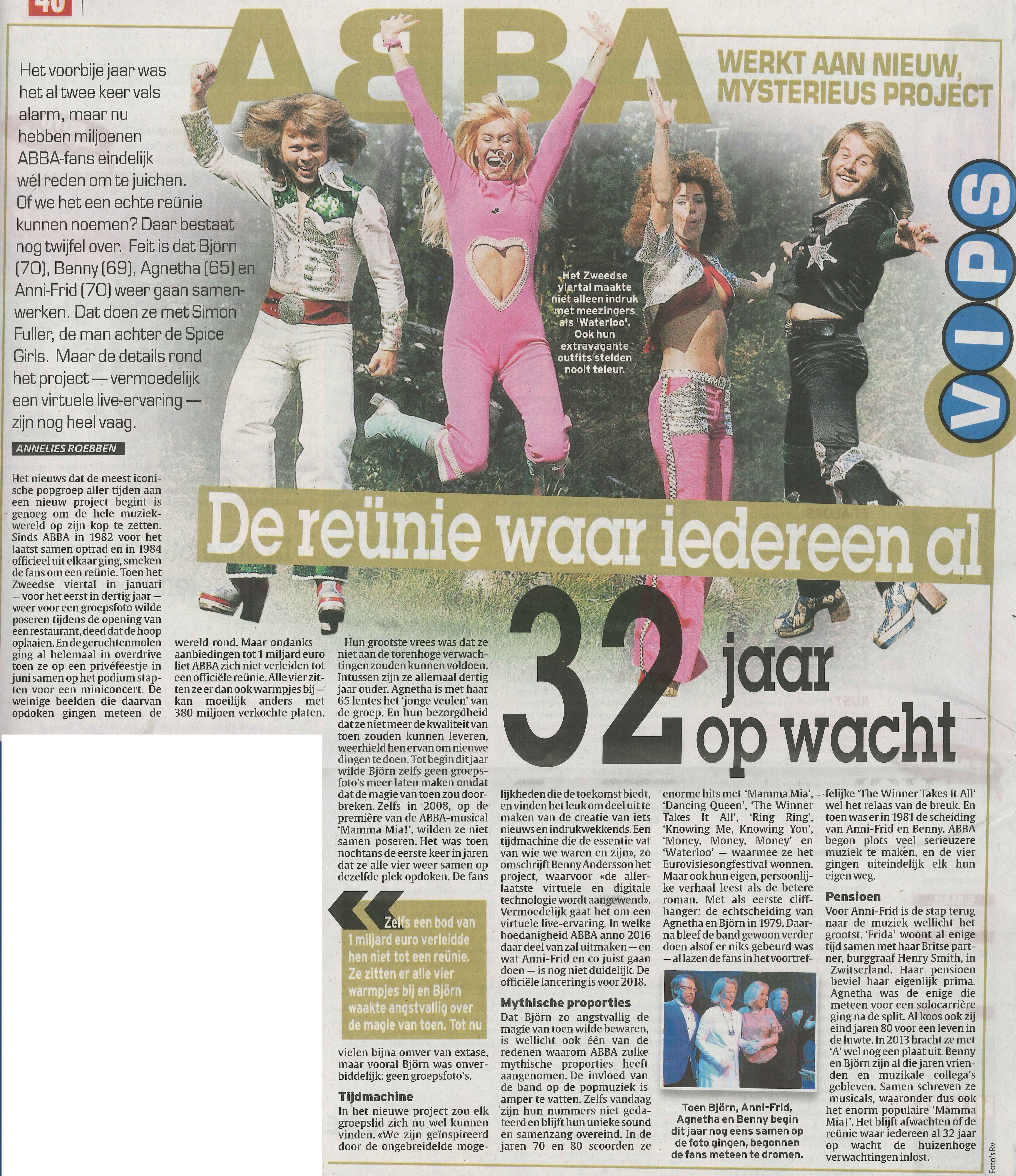 The news that the most iconic popgroup of all times is starting a new project is enough to overturn the music industry.
Since Abba performed together for the last time in 1982 and officially split in 1984, fans were begging for a reunion.
When the Swedish foursome posed for a group photo at the opening of a new restaurant in January 2016 - for the first time in thirty years - this revived the hope.
And the rumors went into overdrive when they all got on stage at a private party in June 2016 for a mini concert.
The few images of that gig went global immediately after they showed up.
But despite offers up to 1 billion euro, Abba couldn't be seduced to an official reunion.
The foursome are well off, which is no surprise with more than 380 million records sold.
Their biggest fear was that they wouldn't be able to fulfill the towering expectations.
Meanwhile all of them are 30 years older. Agnetha - at age 65 - is the youngest of the bunch.
The concern that they wouldn't be able to deliver the quality of yesteryear, withheld them from doing new things.
Up until the start of 2016, Björn wouldn't even allow new group photo's, because he thought this would break the magic of yesteryear.
Even in 2008 at the premiere of Mamma Mia, they didn't want to pose for a picture together .
It was nevertheless the first time in many years, that all four appeared in the same spot together.
The fans almost dropped down in ecstasy, but especially Björn was grim : no photo's !

Now all group members seem to be willing to accept the new project.
"We were inspired by the unlimited possibilities that the future has in store and we like to be part of the creation of something new and impressive.
A time machine that captures the essence of what we were then and what we are now".
This is how Benny Andersson describes the project, that will be using the latest virtual and digital technologies.
Probably it will be a virtual live-experience.
In what way Abba anno 2016 will be part of this - and what Anni-Frid and the others will be doing exactly - is not sure yet.
The official launch is planned in 2018.

The fact that Björn was trying to keep the magic of yesteryear is probably one of the reasons why Abba grew to mythical proportions.
The band's influence on pop music is difficult to grasp.
Even today their songs aren't dated and their unique sound and harmonies remain intact.
In the 70's and 80's they scored gigantic hits with "Mamma Mia", "Dancing queen", "The winner takes it all" , "Ring ring", "Knowing me knowing you",
"Money money money" and "Waterloo" (the song that made them win the Eurovision Song Contest in 1974).
But even their own personal stories read like a novel. The first cliffhanger being the divorce of Agnetha and Björn in 1979.
Afterwards the band continued as if nothing happened.
Although the fans could read the story about the split in the outstanding "The winner takes it all" .
And then there was the divorce of Anni-Frid and Benny in 1981.
Abba suddenly started making much more serious music and the foursome eventually went their own way.

For Anni-Frid the step back into music might be the biggest.
"Frida" is living in Switzerland, together with her British partner - viscount Henry smith - for some time now .
Frida actually likes her retirement.
Agnetha was the only one to pursue a solo career after the split.
Although she also chose a life in the shadows at the end of the 80's.
In 2013 she presented her album "A".
Benny and Björn have been friends and musical colleagues for all these years.
Together they wrote musicals, also including the immensely popular "Mamma mia!".
It will be an anxious wait to see if if the reunion - that everybody has been waiting 32 years for - will fulfill the towering expectations.